Tall fescue is the most widely used grass for cultivated pastures.

Tall fescue is the dominant forage species in an area in the USA referred to as “The Fescue Belt.” This is an area that extends roughly from central Indiana to central Alabama and from eastern Oklahoma to eastern North Carolina. However, this grass can be grown in many other areas, especially in the Upper Midwest, Northeast and humid portions of the Pacific Northwest. It is also grown in the Intermountain Region from Oregon to Colorado. 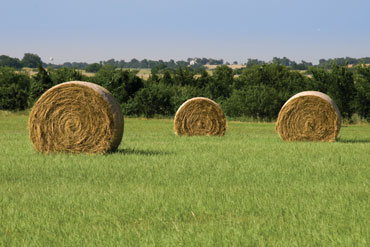 Soil Selection
For best growth, tall fescue requires moist loam or clay soils. It is more tolerant of poor drainage than most other grasses. Deep, sandy soil should be avoided. It is tolerant of a wide range of soil pH, but optimum growth occurs in the range of 5.0 to 7.0.

Fertilization
Lime, phosphorus and potassium should be applied according to soil test recommendations. Tall fescue responds well to nitrogen fertilization. Forage production increases with nitrogen levels up to 240 lb. N/acre. Tall fescue and white clover grown together can produce yields about the same as annual applications totaling 180 lb. N/acre.

Seedbed Preparation
Tall fescue can be successfully seeded using many techniques including a traditional prepared seedbed and no-till, providing the result is uniform seed distribution, proper seeding depth (1/4 to 1/2 inch) and good seed-to-soil contact. When planted on a prepared seedbed, use of a cultipacker-seeder or drill will help ensure success and permit a lower seeding rate. With broadcast plantings, it is highly advisable to use a cultipacker after putting out seed. With no-till planting, suppression of existing vegetation is critically important.

Planting Date
In the lower South (e.g. Alabama, Georgia), planting should be done in September-October. In the upper South (e.g. Kentucky, Missouri, Virginia), late summer seedings are best. Early spring plantings can be successful, but are more susceptible to weeds and summer droughts.

Tall fescue is the most widely used grass for cultivated pastures. Once established, it is one of the most durable of forage grasses. 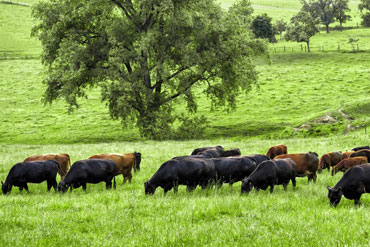 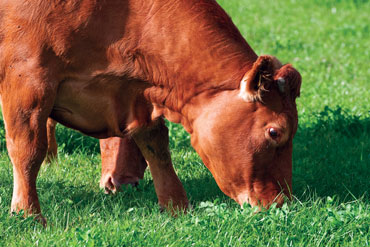 Tall Fescue Hay
Although forage-type tall fescue is grown primarily for grazing, hay is harvested from many fields at least once during the growing season. Tall fescue produces most of its growth during the first one-third of the growing season. Although the major share of tall fescue total production normally occurs during the spring, autumn growth can be substantial, especially when nitrogen fertilizer is applied and rainfall is adequate. Total seasonal production of tall fescue is affected by weather, fertility (especially nitrogen) and cutting or grazing management. Hay yields of 2 to 4 tons per acre are common.

Many factors influence the quality of tall fescue hay including weather conditions during curing, handling techniques and storage conditions. However, two of the most important factors are discussed below.

Stage of Maturity: As tall fescue plants advance from the vegetative to reproductive (seed) stage in spring, they become higher in fiber and lignin content, but lower in protein, digestibility and acceptability to livestock. In one study, average daily gains with growing beef steers decreased from 1.4 lb./day for tall fescue hay cut in the boot stage to 0.42 lb./day for hay cut in the late flowering stage. For best quality hay, the first harvest should be made when the seed heads of the plants are in the boot to early flowering stage of growth (in most areas this is in May). Since tall fescue only flowers once each year, subsequent cuts should be made at 4-week intervals as growth permits. Early cut hay will be leafier, more digestible and consumed in larger amounts than late cut hay. Autumn harvested hay is of especially high quality.

Endophyte Status: Auburn University researchers found a 57 percent reduction in average daily gain and a 12 percent reduction in intake when steers were fed toxic-endophyte infected hay compared to endophyte-free hay. In addition, steers fed infected hay had an elevated body temperature, while steers on endophyte-free hay had a normal body temperature. Infection with a toxic-endophyte is one reason why tall fescue hay has typically come to be viewed as low quality. When the endophyte is eliminated, tall fescue hay quality compares favorably with orchardgrass, assuming similar management for both grasses. 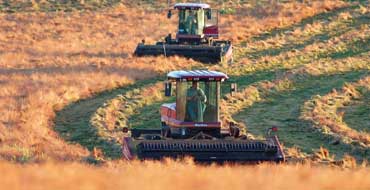 It’s all in the seed.

All of the advanced research, quality production practices, careful cleaning, purity and germination testing plus timely delivery are part of each and every one.